Huawei P30 and P30 Pro smartphones are launching very soon. Since last year’s P20 Pro was the smartphone to have scored the highest in the DxOmark, the launch of P30 and P30 Pro has been eagerly awaited in the tech community. But that’s not the only Huawei products launching in that grand event. Huawei is reportedly launching two wearables alongside the P30 smartphones. Two new editions of the Huawei Watch GT were leaked with minor changes from the original. All run the same software – a mobile OS made by Huawei for devices just such as this – and connect with Android and iOS. Each looks almost identical to the other – save some of the tiniest details in industrial design.

The Huawei Watch GT Active leaked image shows the smartwatch in Dark Green and Orange options, both of which are differentiated by the colour of their straps. The design of the case is quite similar to that of the Huawei Watch GT, however, the colour scheme of the bezel is different, and so is the shade of lines and numbers on it. As for the Huawei Watch GT Elegant, it is tipped to come in White and Black colour options. 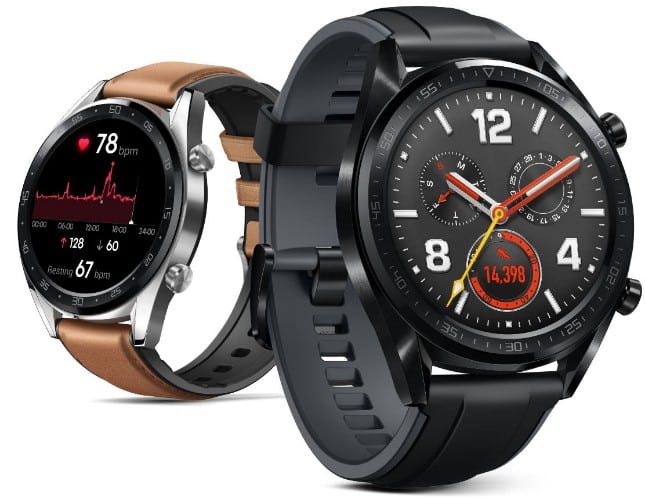 Huawei Watch GT features a 1.39-inch OLED display with 454×454 pixels and 326ppi pixel density. It comes with 16MB of RAM and 128MB of ROM and supports Bluetooth v4.2 as well as NFC, but it does not support Wi-Fi connectivity. The device runs on Android 4.4 or more or iOS 9.0 or more. The Huawei Watch GT measures 46.5×46.5×10.6 mm and weighs 46 grams but without the strap. It is made of three different materials including metal, plastic, and ceramic.

The Huawei Watch GT is touted to be water-resistant with up to 50 meters and comprises of barometer, compass, and altimeter. It can monitor your heart rate with its TruSeen 3.0 heart rate monitoring technology. It is said to provide up to two-week battery life and can last as long as for 30 days if the heart rate monitoring is turned off. Huawei Watch GT India price has not been revealed yet.As far as the rumors hold true, these devices are said to launch on Paris at an event on March 26 alongside the P30 devices. But that’s not the only thing we know so far. This alleged leak also claims that Huawei Watch GT Active will be priced at EUR 249. Similarly, Huawei Watch GT Elegant will be available at EUR 229.